The Clifton Eventers eventing base in New Zealand

Although Clifton Eventers still owns the facilities at Muriwai, since Jock's move to be based most of the year in the year in the UK with the top Clifton horses, the facility has been leased out and is currently not used for training eventers. This page provides a historical perspective. 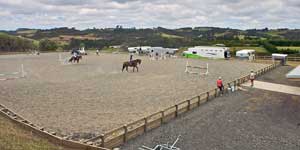 After WEG in 2006, where two of the six horses representing New Zealand in the eventing competition were Cliftons, the decision was made to consolidate in one place the majority of our 20-odd horses, which at that time were distributed around the country with several different riders. The intention was to have one principal rider with a supporting team at one purpose-built facility.

Plans were put in place to set up New Zealand's first purpose-built eventing training facility and to do this to world class standards.

In June 2007 we bought 20 ha (50 acres) of rolling farmland and bush near Muriwai, a seaside community about 30 minutes northwest of Auckland (see Auckland Regional Council's page, Wikipedia, Muriwai's own community site or see a good selection of photos).

In November 2007 we commenced development of the Clifton Eventers training facility, with the health and safety of the horses, riders and others paramount in all decisions.

The facility became operational in February 2008 and was largely completed by October that year when the New Zealand Prime Minister and the local electorate MP, John Key, officially opened the Clifton Eventers' facility with the theme of 'A leg up for Gold', as Jock and Clifton Promise targetted a gold medal at the London Olympics.

As Jock is now based in the UK and the founders of Clifton Eventers in France, the Muriwai property is leased out. However, it remains owned by Clifton Eventers so it could be resurrected as a training facility in the future.

Find out more about the development of the training base at Muriwai.