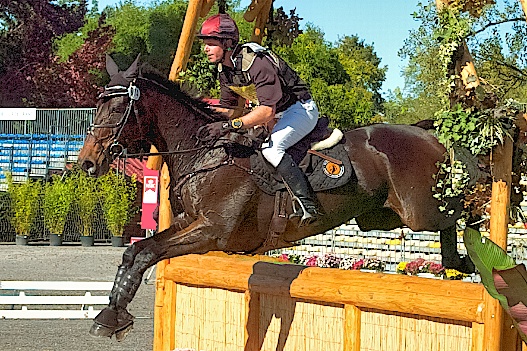 Kevin and Clifton Pinot over the final fence at at Les Étoiles de Pau CCI****, October 2012

Been ridden by Australian Kevin McNab since October 2011, but previously campaigned by Jock Paget.

Been based in the UK since May 2012. Never had a cross country jump fault there.

An absolute machine cross country: exceptionally fast and gives his all, even when tired. Had only one cross country fault in his whole time in New Zealand since moving up from Novice Horse Trials. Very easy and economical. Balances beautifully into a fence. No need to take a pull or waste time (see headcam video of his cross country at Woodhill Sands Advanced and Richfields International Three Day CIC***).

Jumped clear cross country all other 3-stars (one CCI*** and two CIC***) and Advanced Horse Trials, along with all 2-stars (four) and all Intermediate Horse Trials.

Placed 8th CCI*** National Three-Day Championships (May 2011). This was despite rider only having arrived from overseas 24 hours earlier and taking the first part of the cross country steady as unsure of fitness status.

Second CIC** 2009 after only one Intermediate.

Overall competed at 40 eventing competitions since starting as an eight-year-old, and placed in top 10 at 24 of these. Numerous placings at all levels.

54 Horse Trial points – could have many more but has not been pushed cross country generally at Horse Trials.

Only competed at straight show jumping on two occasions – once 2010 and once 2011.

Lovely forward moving and thinking on the flat with three natural athletic paces. Scored 68.9% with top eventing judge Judy Bradwell in 2-star test. In her opinion he would be in top three in any company after dressage on what she saw.

Raced in New Zealand until 1 July 2006 under the name of Walliker (20 starts, two firsts, two seconds and two thirds). See his pedigree and his NZ Racing record.

Purchased by Frances Stead on 6 August 2006 from New Zealand showjumper, Claire Wilson, based near Waipukura, Central Hawkes Bay (see photo of him the day he was bought).

Please note that Clifton Pinot is not for sale.