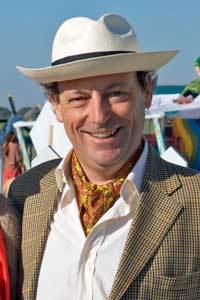 Russell is 'the other half' of Frances and is the webmaster for the website.

He is therefore responsible for many of the photographs, the editing of the videos as well as the overall design and function of the web site.

Ironically, Russell did his degree in Agricultural Economics, so is somewhat bemused to see that after 30 years he is at last making some vague use of it!

In between Russell worked in advertising agencies in both London and Melbourne, on accounts including Qantas, Mercedes-Benz, Shell, Procter & Gamble and Telstra. In 1994 he started work for Terabyte Interactive, New Zealand's first 'new media' agency, and during the following four years helped develop web sites for pretty much every top 20 New Zealand company.

He lives with his wife Frances in the south-west of France, along with their two dogs.