The history of Clifton Eventers

We started supporting New Zealand based riders and horses back in 1998 after Frances finally admitted that her days of competitive riding were over. 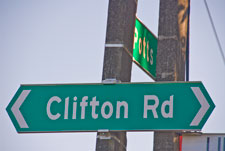 Keen to give back to a sport from which she herself had derived so much enjoyment over the years, Frances started to sponsor a young talented rider, Kirstin Kelly providing her with several young eventers, including Clifton Buzz who as a six-year-old was the youngest horse ever to be put on New Zealand Eventing Pre-Elite squad. In December 2000 he was the only horse to do clear round stadium jumping at Puhinui CCI*** 3DE.

The name prefix of 'Clifton' was chosen simply because it was the name of the road Frances lived on.

This was the start of the Clifton Eventers programme, but like many passions it suffered from a severe attack of 'project creep', with the initial plans to limit investment to "two or three horses" now long consigned to the Annals of history.

In the ensuing years additional riders and horses were added. By 2006 Frances had around 20 horses placed with over half-a-dozen different riders. As you might imagine, the management of this became increasingly complex and after the WEG in 2006, where two of the six horses representing New Zealand in the eventing competition were Cliftons, the decision was made to consolidate the majority of the horses with one rider at a purpose-built facility.

After competing in his first major international competition in 2010, the Rolex Kentucky CCI****, Jock began to spend an increasing amount of time based in the UK with the best of the Clifton horses, so in 2012 Frances and her husband moved to France to be closer to them. However, Frances returns regularly to New Zealand, always keeping her eye open for the next future superstar horses.

The Muriwai facility is currently leased out, but is still owned by Clifton Eventers.