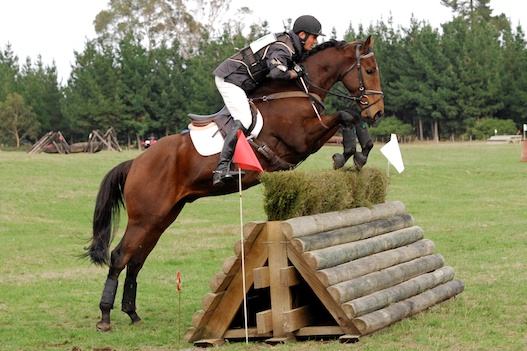 By Straussbrook, the same sire as Clifton Checkers who took his inexperienced rider to great heights. The horse was also only 16hh but as a nine-year-old took his rider to his first CCI****, placing ninth overall and the top New Zealander of the 12 entered. They then went on to win Ede CIC*** in Europe and represent New Zealand at the World Equestrian Games in 2006. Clifton Checkers went from Training to four-star eventing without ever having a cross-country fault and a handful of rails in stadium. His rider has not ridden any other horse above Novice level for the past five years so the performances achieved by Clifton Checkers are a great credit to their partnership and the horse’s ability.

Clifton Chess is very similar to Clifton Checkers at the same age (except for the colour). Both have ‘big horse attitude in a small horse frame’ and enormous heart, presence and a strong natural desire to please.

Moved up to Pre-Novice (1.05 m, 3’ 5” jumping both cross-country and stadium) for his final competition of the season. Finished 5th on his dressage score out of 25 starters.

Only lightly competed but regular placings at Training Horse Trials.

Scored well at Young Event Horse Championship when still very green — 71.5% and 70% in dressage and 77% in jumping.

Fabulous jump technique. Regularly has his knees up around his ears! Very careful, hates to hit a fence, but brave and honest at the same time.

He has never had a cross-country fault, even when ridden by inexperienced working pupils. He had only a total of a few rails in stadium. If ridden even half well he never looks like hitting a fence.

Three good correct natural paces that will improve further as he matures. Good presence and ‘look at me’ attitude. Scored up to 66% with working pupil in dressage.

Snaffle mouth, easy to ride in all phases. A gentleman to ride and handle on the ground.