Beautifully bred mare who will make a fabulous broodmare for the serious discerning eventer breeder. 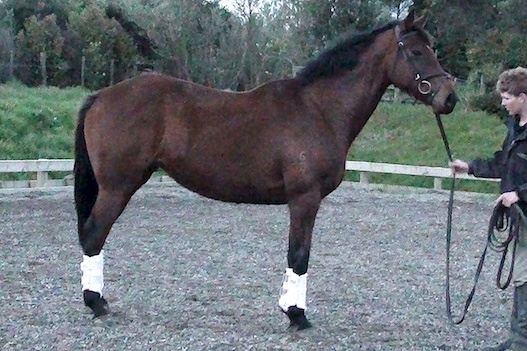 Half-sister to Ian Stark's Gold Medal winning eventer Arakai. She was the last foal of their dam, Happy Hostess.

Top Three-Day eventer ridden by Ian Stark (GB), who rated him one of the very best horses he had ever sat on.

Arakai gave an excellent performance to finish 14th at Badminton 1997 (clear inside the time cross country) when only eight years old and relatively inexperienced.

He followed this with an outstanding performance at Burghley 1997 in the Open European Championships to finish 10th individually and in the winning British team.

The Zephyr line is well known in Australasia as a top bloodline from the magnificent Star Kingdom, Biscay line. Olympic Gold Medallist Wendy Schaffer has chosen a young Zephyr horse as a future star.

A relatively new stallion, Beau Zephyr was an exceptionally fast sprinter. Producing magnificent progeny – powerful with excellent movement and great temperaments – his sire is Black Zephyr, sire of many eventers in Australia.

Unfortunately, this is Happy Hostess' last foal as she is now deceased.