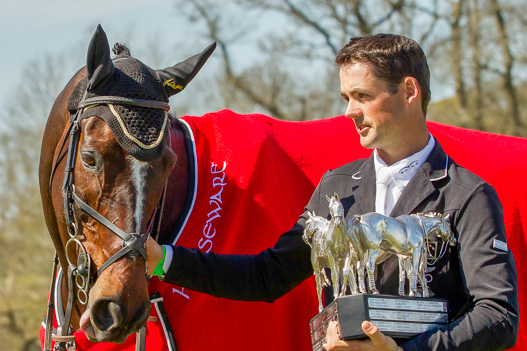 Competed at 12 three day events, seven of them 4-stars, never had a cross country jump fault, never failed to complete.

In 2012 Clifton Promise was the third most successful eventing horse in the world, with 296 FEI points. Remarkably, he amassed this total from just three FEI competitions. In contrast, the top points earner, Leopin FST, acquired his 370 points from seven competitions, and the second placed Nereo needed four events for his 316 points.


The top event horse in New Zealand over 2008/09 prior to departure overseas.

Took part in all eight FEI three-star events over 18 months from March 2008 when upgraded to Advanced level. Never out of the top four placings in these.

Won the inaugural NZ Eventer of the year title in 2009. Retained in 2010. Unbeaten in this competition.

Prior to moving up to Advanced level in 2008:

Clifton Promise is a beautiful looking horse — extremely elegant and with great presence. He has an effortless ground-covering gallop, an extremely scopey and powerful jump, but is also very careful whilst incredibly brave. With his exceptionally quick-thinking brain and athletic reflexes, he avoids getting into trouble and seems to cope effortlessly with any cross country challenge that a course designer throws at him.

This horse loves to work and compete, but is kept for the big four-star three day events. He is never run fast at non-championship horse trials, but always loves to participate in them. He hates the horse box leaving home without him!

Clifton Promise is always the perfect gentleman to all people around him. He would never even put his ears back at anyone, let alone dream of biting or kicking them.

By Engagement out of Darn Style (see his pedigree). His Dam also bred Olivia Bunn's four-star  eventer GV Top of the Line who represented Australia at International level.

He was bred at Mosgiel (near Dunedin in New Zealand's South Island) by Kathryn Abernethy.

Kathryn bought the mare Darn Style in 1997 and sent her to Engagement hoping to breed a filly suitable for breeding riding horses.

Instead she got a colt, which was originally registered as Bachelor Boy, but he never ran in any race with prizemoney. Kathryn sold him for NZ$3,000 as a 2-year-old at the 2000 South Island Sale in Christchurch.

"I was just so pleased Clifton Promise ended up with Clifton Eventers in Auckland to give him a chance as an eventing horse," Kathryn said.

The daughter of Cautious Style and the good race mare, Darnley Flight, Darn Style left four foals. Her first foal, a gelding by Golden Glimmer, as GV Top Of The Line, later made his name as an international eventing horse for Olivia Bunn, of Australia.

"For a mare to leave two world class eventing horses is remarkable. It is like leaving two group one winners," Kathryn said.

Clifton Promise was bought by Frances Stead as an three-year-old from New Zealand show jumper John Cottle's yard at Clevedon near Auckland in June 2002. John had got him a few weeks earlier from a racing trainer who had trialled* him five times under the name of Bachelor Boy in 2001/2, but not raced him. See his NZ Racing record.

Frances identified Clifton Promise as a possible "megastar", although at that stage he had done nothing and was all gangly legs and 16.2hh (see photo taken the day she bought him).

Please note Clifton Promise is not for sale.

* A horse trial in New Zealand is when TBs compete in a preparatory race without prizemoney to qualify for a prizemoney event on an official raceday. They have to be at least officially two years old, the earliest age at which thoroughbreds can race.