Although this horse has been sold and his competition name changed to Bullet Proof, the ride remains with Jock Paget. 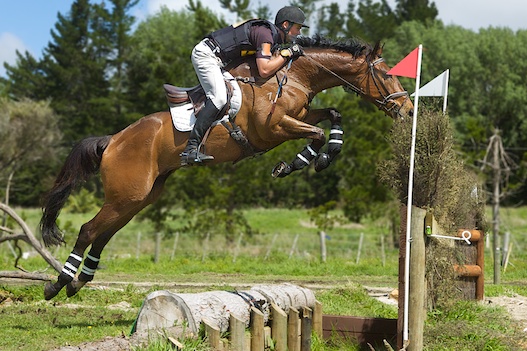 Enormous scopey athletic jump, great gallop and big engaged movement. This horse is destined to star at the highest level on the world stage.

Within 13 months of his first Training Horse Trail start he was third at his first Intermediate. This was before he actually turned seven years old.

Produced carefully and correctly, but has such ability he finds it all very easy.

This horse has an enormous scopey jump but is totally adjustable in front of or after a fence. He has never had a cross country jump fault.

Powerful, elevated paces. Can produce some stunning dressage. Has achieved 76% in a test and regularly scores over 70%. Has scored nine for his paces.

Pulled a shoe off and took a chunk of foot with it in April 2009. Given plenty of time to heal, then rider overseas at Rolex 4-star and WEG, so returned to competition October 2010.

Completed two horse trials late 2010, showing he is back to his previous form:

By Grosvenor who has sired many top jumping horses – both eventers and show jumpers. These include Clifton Shiraz who went to David O'Connor as an Intermediate eventer, David rapidly started winning at Advanced level and the horse was targeted to defend David's Olympic Individual Eventing Gold Medal in Athens 2004 before being killed in a tragic paddock accident. The stable name of Clifton Shiraz was Razz. This horse is named after him, as they are so alike. Grosvenor is also the sire of Parklane Hawk, winner of Blenheim CCI*** with William Fox-Pitt in September 2010.