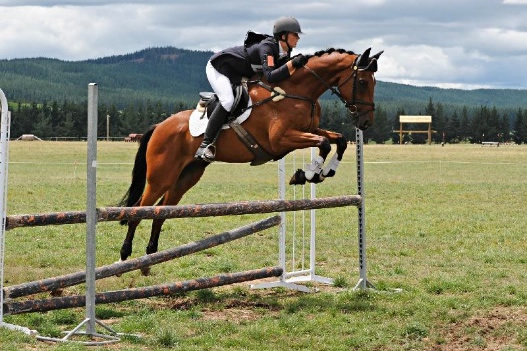 Subsequently competed by three other less experienced riders across 2010:

Moved up to Pre-Novice in 2011 with one of these less-experienced riders with similar good success.

Shown himself capable at Novice Horse trials level with a clear cross country and one rail show jumping in April 2011.

Very bold but careful jumper with really sharp technique, so rarely hits a fence. Looks after himself. Very safe.

Excellent pony club champs prospect. Ready now to really consolidate with a new rider at Pony Club Open/Pre-Novice horse trials level, before taking them up to Novice and beyond in the future.

Good looking fine-build horse with high withers so does not look or ride big.

Ridden in a snaffle in all three phases by all riders in the past.

Easy to truck or float. Good in paddock and to hack out alone or in company.

LinkLink to photographs
Link to videos