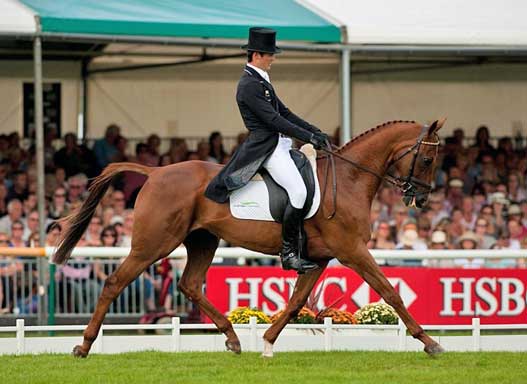 Lucy Allison, based in Hampshire, UK, bought a half-share in Clifton Lush in February 2007 and he moved to the then UK-based New Zealand rider, Joe Meyer.

Joe Meyer competed him successfully from 2007 to 2010, taking him up the grades to 4-star level with completions at Luhmühlen and Badminton, as well as being a member of the New Zealand team at Aachen CICO*** in 2009.

Jock Paget took over the ride in March 2011 and has achieved his two fifth places at the Land Rover Burghley Horse Trials and 14th at the Mitsubishi Motors Badminton Horse Trials.

Professionally schooled over July/August 2006 by one of New Zealand's top show jumping riders (Kim Zander, partner of Greg Best, individual Silver Medallist Seoul 1988). She successfully competed him up to 1.25 m show jumping as a six year old. Her comment was, "If half my show jumpers could jump as well as your eventer, I'd be very happy." He was the favourite horse in the yard.

NZTB by Half Iced out of All For Love (see his pedigree). Raced once in 2003 but unplaced (see his NZRacing record). Bought by Frances Stead in 2004.

Check his results at the British Eventing web site.

Please note: This horse is not for sale.