Exceptional jumper with great scope and is careful. 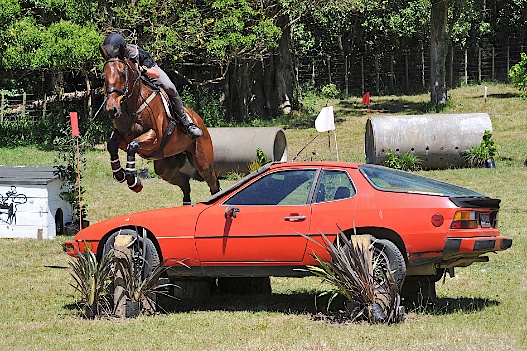 Took a young rider, new to eventing, from Pre-Novice to Intermediate in 12 months between November 2009 and November 2010.

Completed his first CCI* with 60.65 dressage, clear under time cross country and one rail show jumping in May 2010.

Moved up to Intermediate Horse Trials jumping cross country at both his starts late-2010.

Rider showed inexperience at second start when having jumped a lovely clear show jumping round he missed the finish flags. Having realised, he circled back for four jump and 24 time faults – hopefully a lesson well-learnt!

Jumped clear cross country all except twice of his 25 eventing starts. Generally taken quietly and correctly with the long-term in mind. Despite this, still finished in top 10 at half his events (12 times).

By Grosvenor who has sired many top jumping horses – both eventers and show jumpers. These include Clifton Shiraz who went to David O'Connor as an Intermediate eventer, David rapidly started winning at Advanced level and the horse was targeted to defend David's Olympic Individual Eventing Gold Medal in Athens 2004 before being killed in a tragic paddock accident. Also sired Parklane Hawk, winner of Blenheim CCI*** International Horse Trials, September 2010.

Snaffle mouth in all phases.