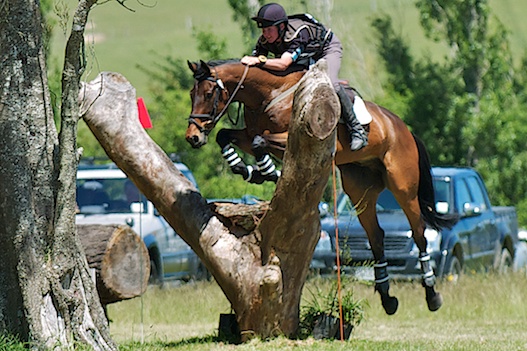 Successfully competed in New Zealand for three years 2008/10. After initial training by more experienced riders, he took a teenage rider from never having competed in a horse trial to double clears at Intermediate level in less than two years.

Always jumped clear in stadium with only three exceptions in 23 eventing starts. He had one rail on two occasions as a five-year-old (2008) and one rail at his young rider's first Prelim competition.

Very few eventers could boast anywhere near such an excellent stadium or cross country record!

Clifton Gem took his teenage rider to his first ever placing at Prelim level when they finished on their dressage score to win at their third Prelim start together.

Clifton Gem successfully moved his young rider up to Intermediate level, jumping clear both cross country and stadium on both occasions.

Clifton Gem finished his time in New Zealand as a seven-year-old by completing a CCI* three-day-event on his dressage score with his rider in December 2010.

As is normal for all the young Clifton horses, Gem was very rarely asked to go fast cross country, hence missed out on many wins and placings he could easily have achieved.

Clifton Gem is a big moving horse with the natural elevation of a warmblood. Dressage was his young rider's weakest phase but now the horse is fully mature he is ready for someone to develop his natural talent in this area into producing a lovely dressage test. He never gets hot or tense so he should be very consistent and reliably highly placed very soon.

Even as a young immature five-year-old horse he scored over 73% in dressage with a more experienced rider.

As you would expect from his stadium record in eventing, Clifton Gem has also won and been placed in straight stadium show jumping competitions.

Clifton Gem was bred by Olympic medallist Greg Best and his wife Kim and is by BT, a stallion Greg stood in New Zealand for a few select mares for two years before it returned to the US. BT is out of a full sister to his Olympic show jumping silver medallist Gem Twist. BT is by the Jalisco B sire Ollisco. BT, a Selle Francais stallion, has some of the most prepotent jumping blood in the sport.

Other Clifton horses by BT have been extremely successful young eventers in New Zealand:

Clifton Gem is a fabulous horse to give a young or amateur event rider confidence and move them up the grades due to his amazing jumping ability. However, he is also a very serious high-level event prospect for an ambitious rider who wishes to compete at Advanced or International level in the future.

Clifton Gem was fully vetted when purchased in 2007 and again before export to the USA in early 2011. No concerns of any significance were found (2011 vet report available for download).

In the USA Clifton Gem has mainly been teaching young riders to event and moving them up the grades. He was originally offered for sale at US$60,000. However, his price has now been greatly reduced to allow us to secure a quick sale to the right rider.

His excellent New Zealand eventing record is available for download.

Photos are from his New Zealand eventing experience.

Videos are from his New Zealand eventing experience: Cross country and stadium – versions late 2010 as at Intermediate at CCI* level with teenage young rider. The others are earlier with this rider and his more experienced rider when five- and six-years-old.